People often ask writers about their daily schedules, hoping to get some nugget of advice that’s going to help them finally start or finish the novel they’ve been planning. I totally understand where this question is coming from, and I ask the same question of anyone who manages to exercise on a regular basis. Writing can be difficult, and a different perspective or the right advice can sometimes make it easier.

I’m the kind of writer who really likes to tell stories (often conflicting) about the things that I do and don’t do — so I have fun with this question. I never mean to mislead anyone or give out bad advice…I think the things I say make sense…for example: “write without pants on before 6am, edit with pants on after 6pm”. But, take everything I say on this matter with a grain of salt, because I’d be some sort of crazy robot if I actually followed my own advice half the time.

There was an article I read recently where someone tried to actually follow the routines that various authors claimed they followed…but he wasn’t willing to follow through with Hunter S. Thompson’s supposed routine and so the article was sort of lame.

At any rate, I make up stories about how I write, and here’s the latest installment, with some other fun questions and answers too. This is from Nancy Christie’s series of interviews called One on One: Insights Into The Writer’s Life.

I've decided to pull out all the stops and sell one copy of my novel per week. I realize that this may sound like a completely unrealistic and "pie in the sky" sort of a goal, but I've never been one to back away from the difficult things. It's like JFK said, "We choose to go to the moon in this decade and do the other things, not because they are easy, but because they are hard."

END_OF_DOCUMENT_TOKEN_TO_BE_REPLACED

A few months ago, I was asked to speak at a large conference for software developers in Vienna. The organizers of the conference invited me based on some articles I wrote that they enjoyed, and not because of my speaking ability. Not one to turn down an opportunity to travel to Europe, I said yes.

END_OF_DOCUMENT_TOKEN_TO_BE_REPLACED 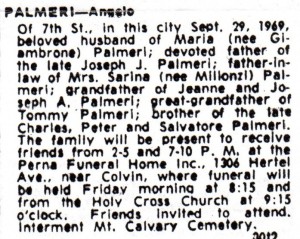 I’ve been a professional writer for 22 years. The first time my writing was published was in 1993, when I was the circulation manager for a small weekly newspaper in Detroit. The full-time reporters considered the job of writing death notices to be beneath them, and shoved it off onto me.

I loved it. Each week, the death notice forms would come in from the funeral homes, along with the remembrance ads from the spouses and loved ones of the recently, or not so recently, departed. Some notices stuck to just the facts: Mr. Volchuck died March 18 at Holy Cross Hospital. He’s survived by his daughter, Anna, and his son, Leon.

Other notices would feature bible verses. Occasionally there would be a line or two of bad poetry or some clip art selected from a binder that was kept at the front desk.

Some death notices would give a bit more information about the person than just the names of their spouses, children, and grandchildren. For example, Jan Kowalski played football for University of Detroit and worked at GM for 30 years.

My job was to put each death notice into a standard format, get the facts and spelling right, and have it all ready to go to paste up (the paper was pasted up when I first started working there) in time for the Tuesday night press run. 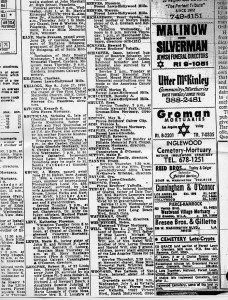 The structure of death notice had been the same for the entire 75+ year history of the paper: Last name, first name, middle initial, location, date of death, survived by wife (nee maiden name), children, grandchildren, location and date / time of services.

Although the policy was to stick to the standard format and keep it as dry as possible, I would routinely include as much information into each death notice as I could. A death notice is a very different thing, with a very different purpose, from an obituary. But, I treated each notice as an opportunity to try to fit an obituary into around 50 words.

The challenge of squeezing human details or touching words into whatever small amount of space was left after listing the grandchildren was one that I was particularly fond of and good at.

The readership skewed towards elderly Polish-Americans. They were notorious gossips and wanted to know everything about everyone else’s troubles, illnesses, and ultimate undoing. The paper, however, had a policy of not printing the cause of death.

I was a 22-year old on a break of indeterminate length from college. Full of unearned self-assuredness, I argued with the editor-in-chief and publisher — who had a collective 40+ years of newspaper experience between them — that the cause of death should be listed in death notices whenever it’s included on the form.

Death notices were one of the most-read parts of the paper in this community. Listing the cause of death, I argued, would make the notices even more popular. The publisher considered it tacky to mention the cause of death, and pointed out that doing so would require additional research and permissions from survivors. I eventually saw that the trouble of printing the cause of death wasn’t worth the effort, and my crusade for openness ended there.

From this first experience with being published and having my writing distributed I learned to be concise, to always be thinking about the audience, and to do quality work while balancing the effort and rewards. These are vital skills for any writer to have, and I would encourage anyone who is just getting started as a writer to spend some time practicing the art of writing death notices.

A couple months ago, I started a writing group. My vision for the group was that once a week, my writer friends and I would get together to write, talk about writing, act stupid, and share stories. I named the group the Hemingway and Gump School of Writing.

I chose a location that served beer and coffee and that was fairly centrally located in midtown Sacramento. I scheduled the first meeting and invited all of my friends who are writers or who aspire to be writers.

I had a great time and got more fiction writing done than I had in a long time. So, I scheduled it again for the same time and same place the next week.

Again, no one showed up and I was really productive and stumbled home after a few hours of writing and drinking beers by myself.

The next week, one other person showed up and I was much less productive. But, it was fun!

After a while, though, I started to feel like the location and the place I had selected for writing wasn’t the best. The mix of people drinking coffee (probably 85%) and people drinking beer (me) felt strange and I wanted a more mellow scene.

I planned a writing crawl with my trusted friend and counsel, Jeff, to seek out a new location for the writing group. The idea was that we would walk around Sacramento with our laptops, and have a drink and write something in as wide a variety of places as possible.

On the planned day of the crawl, I headed to my local coffee shop (Naked Lounge) to warm up and await Jeff. Unfortunately, Jeff wasn’t able to make it out on the morning of the crawl. So, I decided to embark upon the crawl alone.

What follows is the journal of my quest to find the perfect writing location in midtown Sacramento.

My first stop was Naked Lounge, at 15th and Q.

Naked serves coffee of all sorts, plus some pastries. I had an iced coffee and sat at a small table and worked on a sidebar to Chapter 1 of Coding JavaScript for Kids. Naked has free and open wi-fi (no need to ask for a password), there are plenty of places to plug a laptop in, no one minds if you hang out for hours, the coffee is excellent, and the atmosphere is good for morning or early afternoon. The tables are a bit small and it’s often pretty crowded, however.

After I finished my sidebar and coffee, I moved on. My next stop was University of Beer, on 16th Street. University of Beer has 100 beers on tap and some nice picnic tables outside where you can sit quietly and type. There was nowhere to plug in, and the wi-fi was password protected (and I didn’t feel like asking for the password). This places gets pretty crowded at night, so I don’t imagine it would be a good regular night-time writing spot. However, I wrote my company’s weekly newsletter and had a delicious New Glory Brewery American Country Saison.

At this point, I was getting hungry, so I headed across the street to Uncle Vito’s Pizza. Uncle Vito serves pizza by the slice and has a good selection of beers on tap at great prices. I ordered two slices of pepperoni and a Lagunitas Lil’ Sumpin. Everything was delicious. They don’t have wifi that I could detect, but the University of Beer wifi signal was strong from where I was sitting.

I started writing this blog post while waiting for my pizza, then ate my pizza and enjoyed the atmosphere and beer without writing. Vito’s might not be the best place to get writing done (it’s small, and I didn’t feel like I could sit for a long time and type), but so far it’s tops on my list for places to get together with other writers and not write.

My next stop was to be the Sheraton Grand. I like hotel lobby bars, and the one at the Sheraton Grand in downtown Sacramento is a particularly nice one. Unfortunately, there was some sort of fitness convention going on and the place was mobbed. So, I walked through and continued on.

My next stop, the Hyatt Regency on L Street did not disappoint. The bar was empty and has plenty of comfortable seating. The beer list is severely limited, but they also have food, free wi-fi, places to plug a laptop in, and high ceilings to look at while pondering what the hell to write next. I wrote the rest of this blog post up to this point at the Hyatt while drinking two Rubicon Monkey Knife Fights.

Could this be the place? No, probably not…although I have enjoyed my time here. Time to move on to the next spot. Stay tuned.